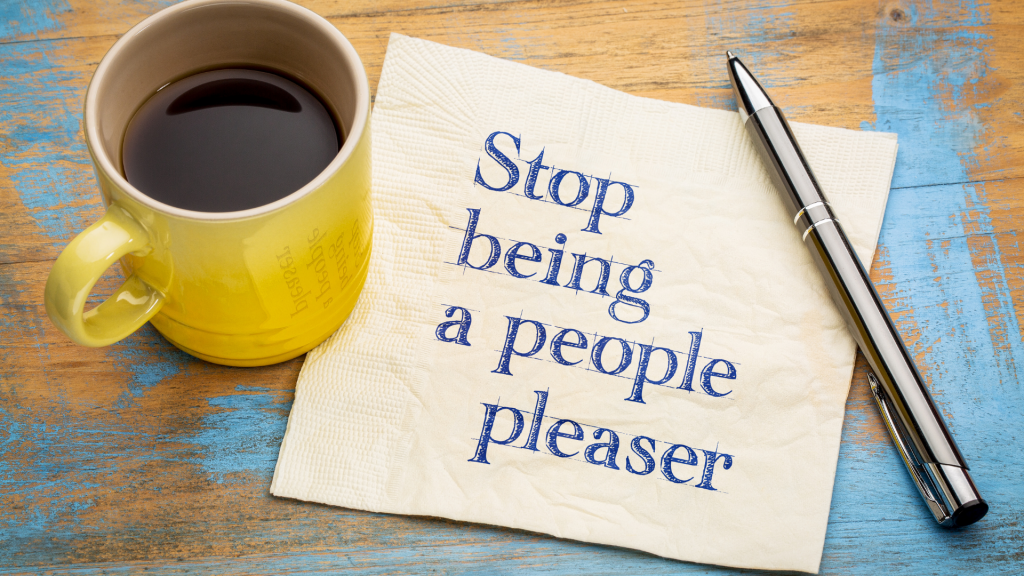 Most of us have learned that helping others at certain times is a good thing. Everyone benefits: Someone feels good because of something you did for them, and you feel good because you made them happy. That’s the way it should work. After a while you realize that they don’t care about you as much you care about them!

What do you get out of people pleasing that keeps you doing it?

This goes beyond why you became a people pleaser; this has to do with identity. Perhaps you’ve come to like the idea that people think of you in a certain way. People pleasing may be tied to being the “go-to” person, the one people can always rely on. Maybe people see you as the “fixer,” someone who gets the job done and makes the situation right. Maybe people see you as someone who can accomplish big things.

Reminder: People don’t really care that much about what you say or do

Holding yourself back in life and trying to act in a way that is pleasing to others can, in my experience, to a large part come from a belief that people care a great deal about what you say or do.

But the truth is that while you may be the main character in your own life and in your head, you’re not that in other people’s lives.

This realization can make you feel less important. But it can also set you free.

Learn how to say NO!

So many women complain to me that they can’t say no. If that sounds like you, you have probably become a ‘yes’ person because you feel guilty about saying no.

Understanding the reason for the guilt could help you enormously to take a stand for your no rather than succumb to a reluctant yes.

Your guilt probably stems from your childhood need to please mom and dad. From the day you were born until you turned approximately seven years old, you did whatever you could do to secure the attention (and hopefully the love) of your parents to guarantee your survival.

A child that senses they aren’t pleasing their parents (and so not securing their survival) will feel unsafe in the world. (Despite most parents doing their best, often they can have their own ‘stuff’ going on making them emotionally unavailable, ‘busy’ or worst-case scenario, neglectful.)

This child grows to be an adult with a need to please others so that they feel safe in the world.

Saying no to someone means risking they will be let down and that alerts the child in them that they are not safe. The truth is, you are being operated by a conditioned pattern of behavior.

Pleasers often feel guilty when they say no to a request. You probably feel that you are being selfish or that you have let someone down. This is misplaced guilt. You have done nothing wrong, and that person will most likely find another solution to their problem.

When you feel guilty, honor the feeling, but think about how much worse you would feel if you said yes to yet another thing that you didn’t want to do. The likelihood is that this would feel worse. Remember that the guiltily feeling will fade quickly.

If you feel that bad, grab your journal and list all the pros and cons of your decision. I bet the pros list is longer!

Tell me in the comments below – Was there a time when you said “no” and how did it made you feel?

Remember, share as much detail as possible in your reply. Your story may help someone else have a breakthrough.

Important: share your thoughts and ideas directly in the comments. Links to other posts, videos, etc. will be removed.